A group of Chatham-Kent farmers have teamed up with several government organizations to further investigate agricultural phosphorous runoff.

Excess phosphorous is considered to be the main cause of the algae blooms that seem to crop up annually on Lake Erie.

On Louis Roesch’s farm, many kilometres away from Lake Erie, a new phosphorous reduction and monitoring system is being tested.

The system collects and filters tiled runoff from a 25-acre plot of land that contains seed corn and grain.

Roesch said local farmers want to be part of the solution.

“An algae bloom is being forecast for Lake Erie in the next few weeks and I think it’s important that people become aware what the agricultural sector is doing to help stop runoff,” he said. “Both rural and urban communities have roles to play in making sure our river and lakes remain as clean as possible.”

It features two holding tanks, a catch basin, and two automated and programmable water testing stations. After a heavy rain, the runoff flows into the first holding tank, where it is filtered through mulch and Phoslock – a patented phosphorous-locking technology. It goes into the second tank and through the same filtering process, before slowly draining into the catch basin. From there it is discharged into the municipal drain.

The water emanating from the filtration system at a media event July 26 looked quite clear in colour.

Little said the filter is designed to help achieve the goal of 40-per-cent phosphorous reduction as outlined in the Lake Erie Action Plan, a joint initiative of the Ontario and federal governments.

The pilot-project systems can test the quality of the water coming directly off the field, as well as the water heading out of the catch basin and into the drain.

“Sites across the municipality can send samples to the lab to examine the varying concentration levels after a heavy rain,” Little said.

At the time of the media event, Little said they were just beginning to receive the results, adding it was too early to make use of the numbers.

But Roesch said the preliminary figures indicate the filter is working better than expected, as it has pulled more phosphorous out of the water than what was anticipated. An added bonus is that the filter appears to also remove some of the nitrogen from the runoff as well.

Little said the Ontario Ministry of Agriculture, Food and Rural Affairs and the municipality are also involved in the project.

There are five test sites at various farms throughout the municipality at this point. Little estimated the price for a farmer to purchase such a system would be at about $10,000 currently, but that number could decrease, as this is a pilot project and it’s a new system.

He said the best place for such a filter is where the soil has a traditionally high concentration of phosphorous, where nutrient management – carefully watching when and how much fertilizer is applied – isn’t the only contributing factor in phosphorous reduction.

“Areas where you have fields with high amounts of phosphorous concentrated in the runoff, where you have little opportunity for phosphorous reduction on the field” are where it’s best suited, Little said. “This could be a great edge-of-field solution.” Roesch said his field is a perfect test site.

“This field is very high in phosphorous, and I also spread manure,” he said.

Chatham-Kent Mayor Randy Hope credited Roesch and other farmers for taking part in the initiative.

“Farmers like Louis really want to do their part,” Hope said.

He said cutting phosphorous levels in Lake Erie would improve the overall health of the lake, which is of vital importance to this municipality.

“We draw our (water) system from it,” he said. “And we have the largest freshwater fishing industry here in Wheatley.”

Hope said the sample sites could help stop some of the finger pointing that’s taking place. He said farmers are unfairly being blamed for the phosphorous levels in Lake Erie.

“We’re going to identify whether the myth that agriculture is responsible is factual or not,” he said.

Hope pointed to municipalities around the Great Lakes basin as contributors.

“We have grey water discharge,” he said of storm sewers that take urban runoff and spill it directly into streams and rivers that empty into the Great Lakes.

He added there are numerous outdated sewer systems along or feeding into the Great Lakes where storm and sanitary sewers are linked. After particularly heavy rains, it they can lead to the spilling of raw sewage into the waterways.

Phosphorous also builds up in lakes and rivers as plants break down, releasing the mineral naturally. Hope said historic phosphorous runoff has settled in places such as the riverbed of the Thames River. Heavy rain or spring runoff pushes that out into the Great Lakes.

“You get all that sediment built up in the river basin that gets pushed downstream,” he said.

The PRC is administered by the Ontario Federation of Agriculture and the Great Lakes and St. Lawrence Cities Initiative. 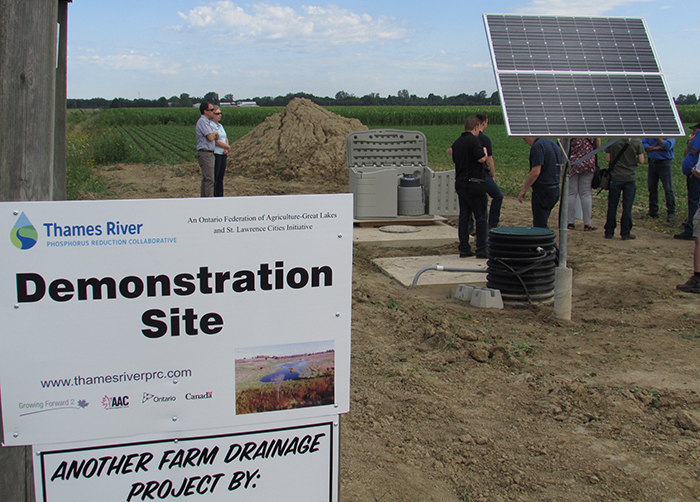