If you’ve driven by John McGregor Secondary School lately, you might wonder about the red dresses in the trees in front of the school and in the window of the library.

Just ask the students in Jenn McQuade’s Native Art class, and they will tell you all about it. Taking to the class theme of Expressing Indigenous Cultures, McQuade said the class has enthusiastically embraced the project art inspired by Jaime Black’s Red Dress Project.

The Red Dress Project was based on the response of Black, a Métis artist, to the issue of missing and murdered Indigenous women. Black’s idea was to collect 600 red dresses and install them in public spaces across Canada in 2012.

“Jaime Black’s purpose was to create an aesthetic/visual response to the serious issue of missing and murdered Indigenous women and girls (MMIWG),” McQuade said about her class’s inspiration. “We aimed to educate and advocate for the women that cannot speak for themselves. We collected red dresses from the school and community donations and even one of my retired colleagues from Sarnia donated her daughter’s prom dress.”

Besides the dresses, McQuade said the class worked collaboratively on an art installation that hangs in the school library entitled “Broken Web.” Two of McQuade’s students, Dorothy Cofell in Grade 12 and Kacey Day in Grade 9, worked on the painting part of the piece of art, inspired by Native artist Terry McCue’s painting titled “Ignorance.”

McCue, born on Curve Lake Reserve near Peterborough, Ont., was so moved the first time he heard about the Red Dress movement, he was inspired to come up with his own tribute to missing and murdered Indigenous women and girls. Taking a year and a half, the Ojibwa painter created a series of 16 works, making up the exhibit “Ripples of Loss,” including the one titled “Ignorance.” 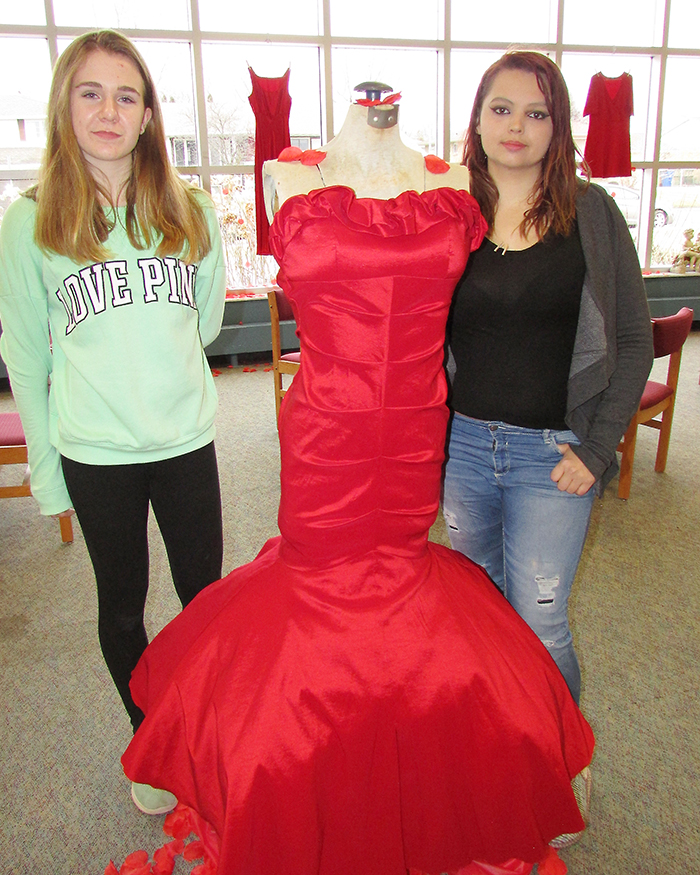 McQuade’s class put their painting on a background of intertwining yarn, which represented the web of a dream catcher with red dress cards containing facts on the murdered and missing women.

Cofell said she knew a bit about the Red Dress project going into the class, but has really enjoyed working on the project, as well as the art dot project inspired by Native artist Christi Belcourt. The art involves stippling paint on a canvas with beads sewn into it in different size and colour medallions, all with a nature theme. The Grade 12 student said about 40 hours have gone into the stippling work and another 15 hours on sewing the tiny beads onto the canvas.

“I have a Native background and saw the posts at the time. It’s not something local so much in Ontario, but it is still a problem,” Cofell said. “I’ve thought about pursuing art after high school and I have a portfolio of 88 pages. Art is definitely a big thing in my life.” 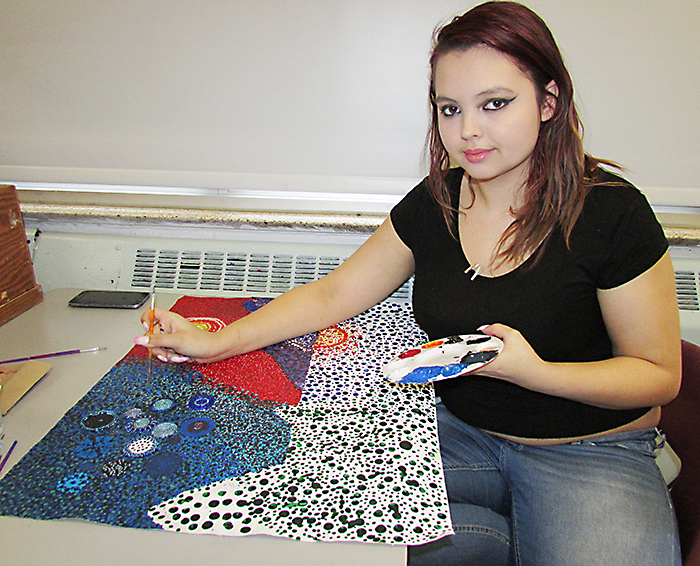