Forty kids and their parents went to have breakfast with Santa recently. Little did they know Santa’s elves would be hard at work making their dreams come true.

As the kids left the Nov. 18 Knights of Pythias breakfast, after telling Santa what they wanted for Christmas, they were told to stop by the Wallaceburg Canadian Tire for a little gift bag personalized for each child and another visit with Santa.

But these weren’t little bags, and the gifts were quite personal indeed – exactly what they’d whispered into Santa’s ear that morning.

The elves, led by Greg Hetherington of CKXS and Peter Marshall of Canadian Tire, were listening in on the chats with Santa and then contacted their team of volunteers to find what the kids were looking for.

Hetherington said the concept was an adaptation of a West Jet giveaway several years ago where passengers told an on-screen Santa what they wanted for Christmas, and upon arrival at their destination, found their presents waiting for them in the baggage area.

“It all started with a conversation with Max (Fantuz). We thought, ‘How cool would it be to pull this off here.’ Max said, ‘If you could pull it off, I’ll start you off.’”

Hetherington reached out to others, and thanked Fantuz, Marshall, Rob Myers of RM Sotheby’s, Steve Baker of Union Gas, Rick Depooter of Lambton Conveyor, Nick Cadotte of Co-Operators Insurance, and Chatham and Wallaceburg Tim Hortons for the support.

Hetherington said keeping the concept a secret was the biggest challenge. Even when asking for financial support, that secrecy had to remain in place. But it wasn’t an issue.

“I started fundraising but I couldn’t tell them when, where or how. I asked for $1,000 and guaranteed it would be a special event,” he said. “And all cheques had to be made out to Greg Hetherington because I needed to be able to buy the presents.”

He raised $14,000 in all, and Marshall said it was incredible how many folks responded in a pure leap of faith.

“Greg did a great job raising funds for this. I knew what it was. But others didn’t,” Marshall said. “These people were writing cheques on Greg’s word, giving him cash. They didn’t know what it was for until the day of the event. I think that’s so commendable. In a small community like Wallaceburg, the level of trust and care is very moving.” 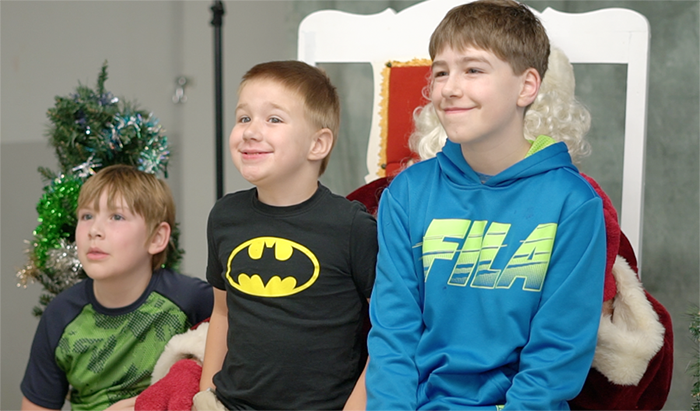 Hetherington said he approached the Knights of Pythias, asking to be part of the breakfast, but providing little additional information.

“Maybe about five people knew what we were up to. The Knights didn’t know. We swooped in and sat in on the Santa asks and ran out to get the item,” Hetherington said.

That required about two-dozen volunteers. Marshall said they had people stationed in Wallaceburg at Canadian Tire and Wal-Mart, as well as at the Canadian Tire, Wal-Mart and Best Buy in Chatham, and even at Toys R Us in Windsor.

The contingency planning went even beyond that.

Marshall said had a child asked for such a gift, TJ Stables was prepared to provide riding lessons and offer the keep and use of a horse for a year.

“We were trying to avoid the what-ifs,” Marshall explained. “We even had a used car lined up in case we had a kid saying, ‘All I want for Christmas is a car for my parents that I can get a ride to hockey in because our car broke down.’”

The pony and the car never came up.

Hetherington said the Knights of Pythias breakfast, which has been going on for three decades, provided the perfect point of interaction for the charity event.

“We just got lucky with the kids and the families,” he said. “One family opened up about $1,000 in gifts. The mother was in tears. She told me these were gifts the kids just wouldn’t have got this year.”

Marshall said he saw the tears of joy from families as well.

“We had three kids show up late in the day. They were expecting to get a $5 gift bag. They came over and Santa had already left,” he said. “We told them we didn’t have a gift bag for them, but had something in the back with their names on them.”

That “something in the back turned out to be a Nintendo DS with a couple of games for one child, a Nintendo Switch with a Super Mario game that matched the hat the child was wearing that day, and a Batman/Superman cave for the third child.

“The three kids are just as excited as can be. The mom and dad are just in tears. He (the father) comes up and hugs Greg and me. He said, ‘You have no idea what you’ve done for us. We could have never done this.’”

Marshall said being part of the event was a moving experience.

“We were giving out iPhones, iPads, Xboxes, Nintendos. We managed to get every single thing every kid asked for,” he said. “I was pretty happy about it. These kids and parents were just so excited. It was so cool to see. You don’t really realize what you’re doing until it all comes together in the end.”

Hetherington said providing the dream gifts to the 40 children cost about $9,000. The leftover funds will be donated to the Chatham Goodfellows campaign and to the Salvation Army.

The owner/operator of CKXS doesn’t rule out this happening in the future, but said it wouldn’t be easy to pull off again.

“Will we follow up with this somehow? Maybe,” Hetherington said. “I just don’t know how we’d do it quietly.”

He know he’d have the support, as he said numerous members of the community approached him in the wake of the event to say they want to be part of it in the future.

Marshall said he might suggest Canadian Tire look at doing something similar corporately, selecting a different small community each year.