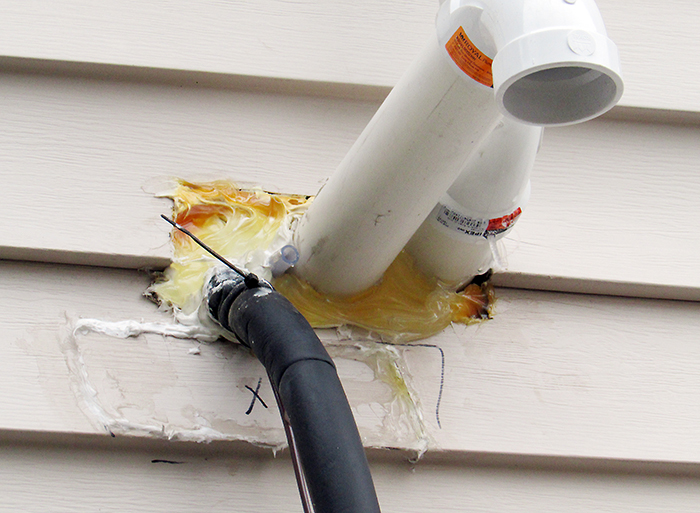 The company responsible for this botched furnace install last year at a Given Road home recently pleaded guilty to a pair of charges laid by the Ontario College of Trades.

Nine months after a botched furnace installation into a Chatham home, the installer finally saw his day in court.

Tyler Charlebois, spokesman for the Ontario College of Trades (OCT), said Bui pleaded guilty to charges under Part 3 of the Provincial Offences Act.

“He wasn’t actually licensed to do the work of a compulsory trade,” Charlebois said. “Just like in any probation, he is not allowed to perform the tasks of a compulsory trade. If he was to go and look at becoming certified in that trade, that would be a different story.”

Bui’s penalty came more than three months after the company who sent him to install the furnace and air conditioning system, Green Planet Home Energy, pleaded guilty to two charges related to the Ontario College of Trades (OCT) section: “No person shall employ or otherwise engage an individual to perform work or engage in a practice that constitutes engaging in the practice of a compulsory trade unless the individual holds a certificate of qualification in that trade that is not suspended or unless the individual is an apprentice in that trade and is working pursuant to a registered training agreement that is not suspended.”

On Oct. 16, according to Charlebois, the company sent Bui to a home on Given Road home to install a furnace and air conditioner.

“Mr. Bui was directed there by the defendant business to install an air conditioning unit and a furnace, and to perform all the electrical work required for that installation,” he said. “Mr. Bui installed the cooling-heating combination system and installed, altered and drew electrical conductors through conductor enclosures for that system, as engaged by Green Planet. Mr. Bui received payment for this work from Green Planet.”

One problem. Bui does not hold a valid certificate of qualification for either electrician or refrigeration and air conditioning system mechanic, according to the OCT.

“Accordingly, by engaging Mr. Bui to perform the work, the defendant committed the offence of engaging an unauthorized individual to perform the work of two compulsory trades, contrary to s. 4 of the Ontario College of Trades and Apprenticeship Act,” Charlebois said.

When Bui installed the furnace and air conditioner, homeowner Larry Gadal wasn’t aware of this. But upon seeing the damage done to the exterior of his home, combined with the fact the furnace couldn’t adequately heat the house, he received a rude awakening.

Gadal told The Voice previously that Green Planet had been very aggressive in its sales pitch for the heating and air conditioning system, offering a long-term lease of the units, with no cost to install, with monthly payments of $158 a month for 15 years.

“They did a horrible job. They drilled five holes through the wall before they got it where they wanted it,” Gadal said. “If they didn’t hit the right spot, they’d just move over.

“When they left, they didn’t even fill the holes. There was about a two-inch gap beside one of the pipes,” he said. “They came back with a caulking gun.”

When the cold weather hit, he learned the furnace couldn’t even heat his home to 20C. As a result, he called the company and told them to come and get their furnace. He also called local heating and cooling company Absolute Comfort, who ripped out the Green Planet system and installed a new furnace, for a greatly reduced cost.

Charlebois said the OCT has the public’s best interest at heart.

“Our goal is to look at compliance. We protect the public’s interest and make sure those doing the trades are actually certified to do the work,” he said.

But the first line of protection, and the best, he said, is the public itself, specifically the person who is having work done.

“Whether you are a business who is subcontracting or a homeowner who is bringing someone in, check the person’s qualifications. Don’t assume the person is certified,” he said. “Ask to see their licence. All of our members carry identification cards that shows what they are capable of doing.”

He added anyone can go online to www.collegeoftrades.ca and check to see if a tradesperson is qualified.

“The public needs to know more. They can protect themselves,” Charlebois said. “You should always know who is coming into your home.”

« A labour of love Family keeps in time with Canada »