A friendly trip to Windsor earlier this year morphed into another group helping those in need in Chatham-Kent.

Quinn Lassaline and Rachel Raspburg say the trip turned the pair onto the 100 Women Who Care (100WWC) movement.

“We originally went on a road trip with our young kids,” Lassaline said. “We saw a mural on a wall and walked over to it and read about the 100WWC organization.”

They were intrigued by the simple approach of the organization, where women meet four times a year, choose a charity to support, and donate.

Raspburg said she and Lassaline reached out to the Windsor branch to learn more.

“We got in contact with them and they invited us to their main meeting. They helped us get ours off the ground,” she said.

“It’s a great philanthropic concept. We can donate to a charity, but having 99 other people donate too, it makes a great impact,” she said. “We wanted to give back to Chatham-Kent. We are both longtime Chathamites. We both moved back here after attending university and decided to raise our children here.”

The 100WWC C-K group has met once, in late August. That resulted in a $5,000 donation to the mental health program of Chatham-Kent Integrated Children’s Services, as the 50 members of the group each donated $100.

When the group doubles in size, it will achieve the simple mission statement of 100 women, one hour, $10,000, local impact.

The group meets four times a year, with each meeting lasting about an hour.

“Essentially, four hours and $400 a year. That’s your commitment,” Lassaline said. “You leave with a happy heart.”

Raspburg said 100WWC C-K is open to all women, but is of particular interest to a specific group.

“It’s meant for any woman who wants to join, but especially for women who are busy and may not know how to give back to the community, but want to,” she said.

Members can nominate a charity of choice to support at each meeting. Those charities get put into a hat and three are pulled, Lassaline said. The people who nominated those charities then speak as to why they selected them. Everyone then takes part in a written ballot and one with the most votes receives the money.

She said the presentations are informal and are typically between three and five minutes in length.

“We had a member realize the need and saw a connection,” Lassaline said of the August donation to Children’s Services. “She made a great presentation and the majority of the group selected it.”

While the 100WWC C-K group has not yet reached its target number, Lassaline is very pleased with the progress.

“We started small, but we’re mighty. This is really grass roots. People are committed,” she said. “We’re anticipating a lot more members for the November meeting.”

That meeting takes place Nov. 30 at the Retro Suites at 6 p.m.

Just because someone missed out on the inaugural meeting doesn’t mean they’ve missed a chance to contribute, Lassaline stressed. People can join at any time and are asked to commit for a one-year period – four meetings.

“We are always looking for new members and new nominations,” Raspburg said, adding the need is ever present. “There’s something new every week and we realize it could be nominated.”

Any non-profit organization in need in Chatham-Kent is eligible, the women said.

The 100WWC movement began a decade ago in Michigan. It’s become a worldwide effort, with 91 organizations in Canada.

For more information on the local chapter, go to 100womenwhocarechatham-kent.com. 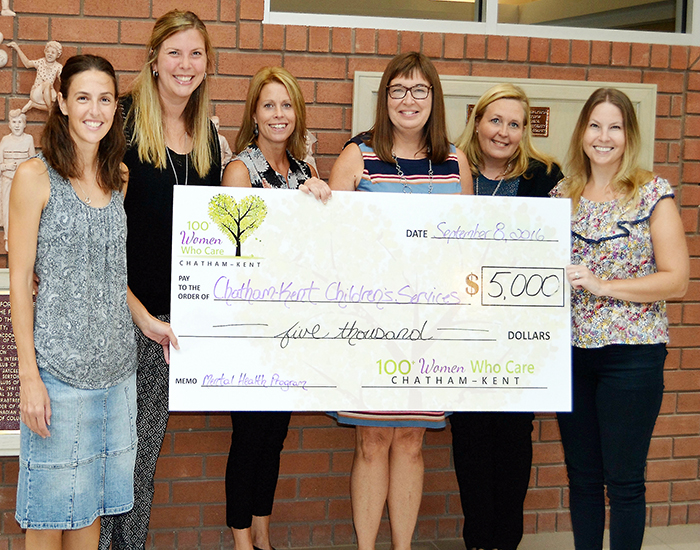