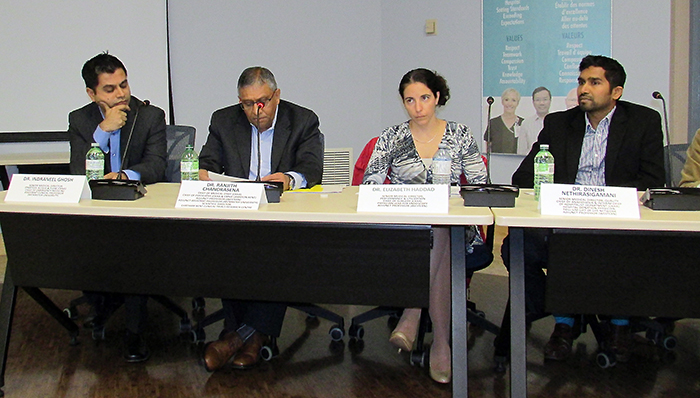 The members of the Medical Advisory Committee – comprised of various Chatham-Kent Health Alliance department heads – held a press conference to share their support for dropping the ER in Wallaceburg.

Dr. Ranjith Chandrasena, chief of medical staff and psychiatry at CKHA, said the MAC members reviewed the alliance’s proposal to consolidate emergency services in Chatham, and unanimously endorsed it.

“It is our mandate to provide the best quality of care for Chatham-Kent, not Chatham, not Wallaceburg, not Walpole Island, not Blenheim …,” she said.

As for the concept of turning Sydenham District Hospital into a 7-11 clinic, the doctors declined to comment.

He was referring to the squabble between the SDH board and its Chatham counterparts, the St. Joseph’s and Public General Boards. The tri-board’s governance was suspended in early April after the SDH board would not agree with the concept to turn that hospital into a 7 a.m. to 11 p.m. clinic.

The MAC members believe consolidation of critically ill patients through a model change is essential for provision for better, high-quality health care.

“We have a chance to make a change. More people’s lives will be saved,” Ghosh said.

He stressed the need to best treat emergency room patients in the direst need. He said emergency medicine is co-ordinated care and patients receive treatment based on the Canadian Triage Acuity Scale (CTAS), a scale of one to five, with one being the most in need and five being least urgent.

While the department heads are unanimous in their support of the proposal, they admitted not all CKHA doctors are on board.

“To all the physicians who may disagree with us, and there is a minority, if I was to ask them where they wanted a family member to go (for emergency care), I wonder what they’d say,” Chandrasena said. “It’s about doing the right thing.”

Ghosh said a number of new trainee doctors and even senior physicians will not work in the ER at SDH, “because they feel it is unsafe.”

She said that team is comprised of nurses, doctors, nurse practitioners, and paramedics.

Kirenko said if someone suffers a stroke on Walpole Island for example, and paramedics respond, they’ll drive the ambulance straight to Chatham.

“Stroke survivors are brought directly to the regional stroke centre,” she said. “It’s here in Chatham.”

She added the regional stroke centre concept is part of the Canadian Stroke Strategy.

“It’s not to the closest place, but to the right place,” Ghosh said in support, adding that mindset applies across the board for ER patients in greatest need of immediate medical care. “We want somewhere that gives the best care to every patient every time, no matter where they come from.”

He said lower patient numbers at SDH could lead to tragedy.

“If we don’t have the volume to maintain our skills, bad things can happen,” Ghosh said. “Volume drives quality. Backup speciallist care is critical and we can call in speciallists as needed here. It’s in our DNA when you are doing emergency medicine that you have to have backup.”

Sheldon Parsons, chair of the SDH board, attended the press conference. He left, with more questions than answers.

“They care about CTAS 1 and 2,” he said, referring to emergency department patients in dire need of receiving immediate care. “But the proposal goes way beyond CTAS 1 and 2.

Ghosh said the vast majority of people who come to the SDH ER aren’t at the CTAS 1 or 2 level.

In terms of volume, he said patients are resuscitated in Chatham on average of 38.5 times per month, where in Wallaceburg, the number is 11 per month. For intubation, 7.3 are done a month in Chatham and 1.6 in Wallaceburg. Administration TNK, a medicine to get the blood flowing back to the heart after a heart attack, is given in Chatham four times a month, while 0.6 in Wallaceburg.

Another critical procedure, expanding an artery to increase blood flow to the heart, by using a balloon, is used at both campuses. But the difference between Chatham and Wallaceburg in time from a patient coming through the door to receiving the procedure is dramatic. The delay in Chatham is on average about 162 minutes, while the delay in Wallaceburg is 370.

“If I had a heart attack, I’d rather go to Chatham due to the times (to receive care) and to prevent damage,” he said.

Yet no member of MAC could explain what has led to the discrepancy in times between Chatham and Wallaceburg for the procedure.

That had Parsons shaking his head.

“We are confused and very concerned about the loss in time from the patient who experiences the procedure,” he said.

Parsons and the rest of the SDH board will review the MAC’s position at its next board meeting, which is scheduled for May 4.