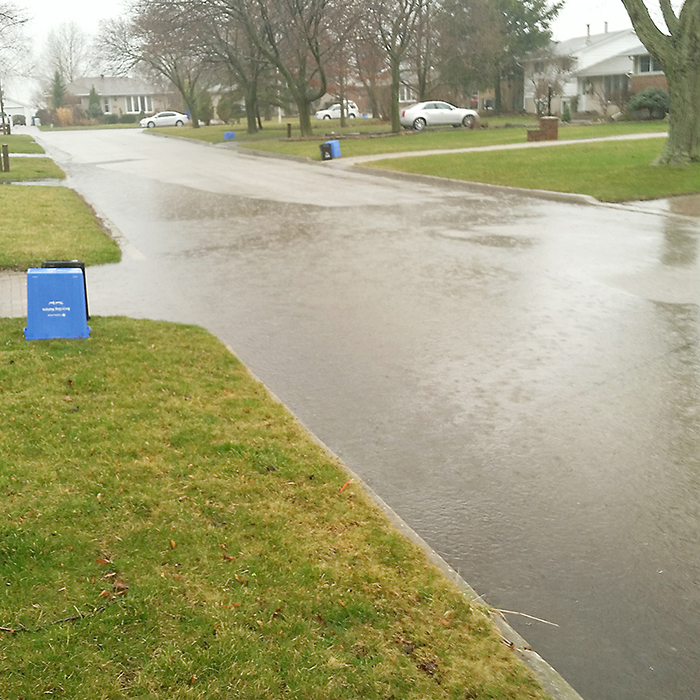 Wet enough for you?

Every spring, downpour leaves me cringing, as each time it rains, we get a lake in front of our house.

We have one of just four storm sewer drains on our street. It sits right at the end of our driveway.

In other words, I am forever clearing leaves off of it to help the street drain.

That’s not a big deal. What is a big deal is the fact the drain in our bathroom sink would work faster than the storm drain does these days.

I’ve brought the problem up to the municipality. Repeatedly. The public works guys have been out to look at it. Repeatedly. They’ve tried vacuuming it out to clear out the gunk, but it has reached the point where there’s a serious blockage.

My latest call to city hall put me in touch with a gentleman who said it appeared there was something like cement obstructing the drain and they may very well have to excavate to fix the problem. But that can’t take place until the frost is out of the ground and spring is upon us.

Um, did the frost ever really go into the ground this year? And spring is indeed upon us.

I realize this time of the year annually delivers a host of issues throughout Chatham-Kent for our Public Works guys. Potholes always have them out and about patching hither and yon in the spring, and that’s just for starters.

For me, it’s the fact there are just four drains on our long street and one quarter of them of them are clogged that is a concern. Last week, water was flowing over the middle of the road to escape down the storm drain on the other side of the street. Sunday night’s storm left a large lake in front of our property Monday morning, even when the driveway and much of the road nearby was dry. I shudder to think what it was like at its high-water mark.

We also happen to have an interlock brick driveway. Standing water and the sand/fine gravel filler and base don’t get along. The interlock at the end of our driveway is below the curb cement now and is only getting worse with each rainfall.

Mike McGuire, who co-owned the shop with Ted Ritchie, is now cutting hair inside the pearly gates, perhaps giving St. Peter himself a little trim. Mike passed away in his sleep earlier this month at the age of 74.

I first met Mike when he and Ted called up last fall to talk about advertising. The duo was a treat to deal with: two good, old-fashioned nice guys.

I found them so intriguing that I did a feature article on the two 70-somethings who kept cutting hair and telling stories long after many folks in their line of work would have dunked their scissors in Barbasol for the last time and called it a career.

Both men said they were amazed at how well I captured them in the story. It ran Jan. 21 in The Voice.

Mike began cutting hair in Chatham in 1961. He, like Ted, is an old-school barber, not a stylist. Nothing fancy, and nothing pricey.

Being a barber, it seems, is a lot like being a bartender. You hear and tell a great deal of stories. At Mike & Ted’s, there was always a steady stream of folks, some in to get their haircut, others just to stop and swap tales.

Although I’d only known Mike a short time, I got the feeling he spent most of his life with a smile on his face. He always had a very positive demeanor; warm, welcoming.

Mike, you will be missed.

A buddy of mine from my days in Lindsay, Glenn Kyle, passed away recently. We received word on the weekend.

News of his passing left me stunned. Glenn was my age. We had a great deal in common.

The guy always lived life like there was no tomorrow. Eventually, he was right.

Few people I’ve met over the years were as funny or friendly as Glenn. Or as musically talented. A campfire, Glenn Kyle and an acoustic guitar meant hours of fun and entertainment.

The next time I hear The Band, I’ll think of Glenn. Ditto for the next time I’m munching on chicken wings, his family’s food of choice.

I might have to track down Tommy Boy or Multiplicity on Netflix to watch them again as well. Of course, I’ll have to have a beer and some wings close by.