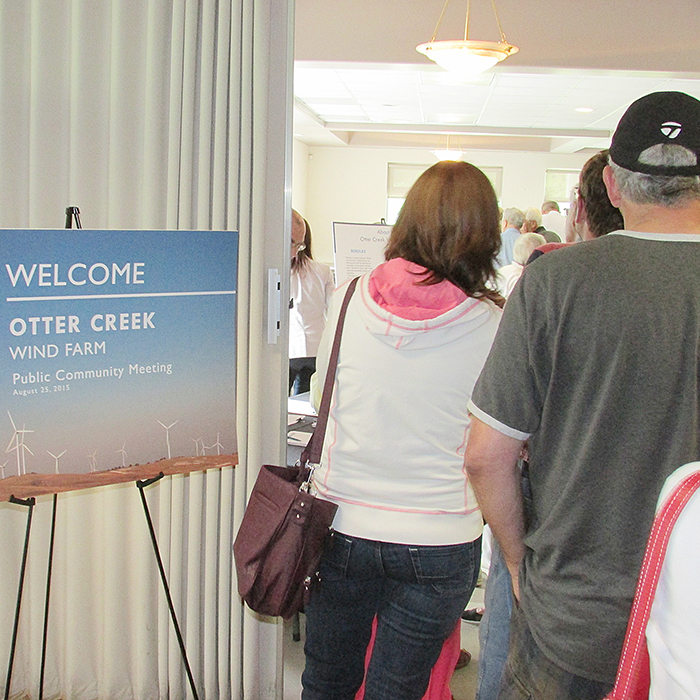 Coffee, cookies and confusion were served up in equal measure during last night’s public meeting to discuss a proposed wind farm north Wallaceburg.

The Otter Creek Wind Farm Project backed by Renewal Energy Systems and Boralex Inc. will contain approximately 20 turbines in an area bounded roughly by Payne Line on the West, Stewart Line and McCreary Line to the south, Whitebread Line and Kent Line to the north and the Mandaumin Sideroad to the east.

Company officials won’t comment on the number of landowners who have committed to the project, however, The Voice has learned that five have agreed to serve as hosts, with negotiations continuing with others.

A crowd filled The Clubhouse at Baldoon and spread out into the parking lot as more than 150 went through the doors in the first hour of the session.

Many in line expected a formal presentation but were directed to some of the eight staff lined up at various stations around the building.

Others who did weren’t happy with the information they received while a number of people who didn’t want to be identified simply don’t want more turbines around the municipality.

Mari Cole said she had concerns about the construction process, including integrity of the roads and other topics.

“I got responses, not answers,” she said.

Joe Kerr was trying to find out if turbine firms would be required to fulfill the same requirements as businesses that put in wells for oil or gas.

“When a well is drilled, there has to be a percentage of the cost put in a provincial fund that aids in clean-up if there’s a problem and the owner isn’t around to fix it. Who’s on the hook here if the company isn’t around?”

George Eagleson said he is disappointed that despite the public nature of the meeting the biggest question won’t be answered.
“Why didn’t we just get a chance to say we don’t want them? Everything I heard was tentative this and possibly that. By the time the project is approved it surely won’t be tentative.” Patricia Lemaire, a spokesperson for the project, said comments made during last night’s session would be included with the information being sent to the province by the September deadline for approvals.

“If anyone has questions they didn’t get answered they can still contact us through our website at ottercreekwindfarm.ca. We want our neighbours to have as much knowledge about us as they can.”

Otter Creek is one of five proposals seeking provincial approval for what is expected to be the final wind project in Chatham Kent, which already has the most turbines in Ontario. Others include SWEB Development for a three-site development in the former Chatham Township (Meadowvale, Duart and Clachan) area, North Kent Wind project Phase 2 by Pattern Renewable Holdings and Samsung Renewable Energy, the Kruger Energy Optima Wind Project and the Romney Wind Energy Centre by EDF EN.

There are a number of other firms expected to apply for the 60 megawatts available west of London. Each turbine produces two to three megawatts per year.

The province is expected to make a decision by the end of the year with construction on winning bids commencing in 2018.