That’s what Julie Ross and the St. Clair College Capitol Theatre have offered Friday evenings this summer. And the local citizenry is starting to take notice.

Ross runs her Song C!rcle – a performance featuring a local musician and herself, including storytelling behind the music – on the second-floor patio at the Capitol.

Each time they add more chairs, more people show up to fill them, according to Lesley Grand, general manager of the theatre.

They’ve been adding seats each week, taking furniture from the patio on the other side of the second-floor lounge, while at the same time removing any large tables.

“It’s been amazing,” Grand said of the turnout. “A few people have come each week, about half the crowd. The other half are specific to the artist.”

This isn’t a late-night gathering either. The Song C!rcle takes place between 5 p.m. and 7 p.m. on Friday nights throughout the summer.

Ross, who runs Fit as a Fiddle, said she hold the C!rcle out of her store normally, but when this opportunity arose, she jumped at it.

“This encourages people to showcase their own music,” Ross said. “And if we can fill the patio, we’re blessed.”

Leia Weaver took to the stage with Ross July 10. She took in the show the previous week as a spectator and loves the concept.

“This is awesome. It’s low key and nice,” she said.

Grand said the Song C!rcles on the patio are another effort to keep the downtown vibrant after 5 p.m.

“We’re just trying to encourage people to come downtown after work,” she said.

Grand added the timing is intended to catch people right after work and before dinner. The Song C!rcle also feeds into the weekly Concert in the Commons at the Downtown Chatham Centre. Those events take place throughout the summer on Friday nights, beginning at 7 p.m.

To learn more about the Song C!rcle and to see who’s playing, click here. 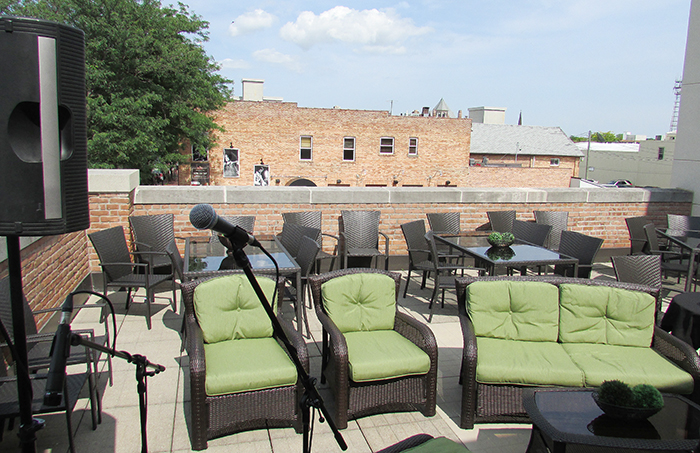