I attended a rather moving ceremony on the weekend to mark the 25th anniversary of the Montreal Massacre.

About 90 people attended. More than a few were in tears at various points during the service.

The Chatham-Kent Domestic Violence Community Co-ordinating Committee does an excellent job with the event, driving home the point that violence against women – not just in the home, but everywhere – must not be tolerated.

To hear about the same number of women are killed in Canada each year today as there were 25 years ago is maddening.

Surely society has evolved, hasn’t it? 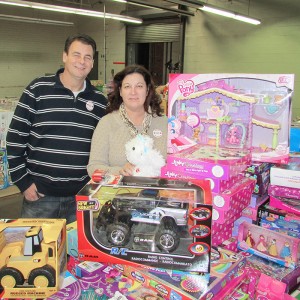 Tim Haskell and Rose Peseski of Chatham Goodfellows sort through some of the donated toys the group will be handing out to families in need this holiday season.

I met with a few of the Chatham Goodfellows recently for an update on how their annual “No Child Without a Christmas” effort is proceeding. Despite the theft of $3,700 in toys and batteries, they are doing well.

But one area in which they are short is toys for kids aged 10-12. It’s that tough area where they aren’t little children and are on the cusp of becoming teenagers.

The Goodfellows are packing toys this week, but are still accepting donations. If you can, please stop by at the former Guspro building on Grand Avenue East after 6 p.m. to drop off a donation, or call them at 519-354-1146 to set something up.

Speaking of the toy theft, Mr. Goodfellow himself, Tim Mifflin, showed me the small area the thief had to crawl up into between a loading dock and the back of a trailer to break into the trailer. Let’s just say it would have been difficult for anyone who wasn’t borderline thin to get in there.

The efforts people go to in order to steal from charities…

Just as bad, Tim said they’ll likely get a call or two at the last minute from families who get victimized by a break-in just a couple of days before Christmas. Too often, someone breaks in and steals all the gifts under a family’s Christmas tree. 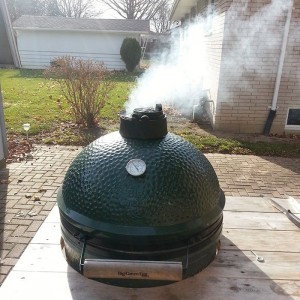 Jim and I work in an office full of women – very smart, funny women, who put up with us.

But there are days where I wish there were more guys around, if you can believe it. One such day was Monday, the day after a busy NFL weekend, one where the Raiders actually won a game. The Lions won too. And college football decided who would vie for the championship.

And the ladies are talking about cosmetics, lotions, hair masks, cuticle scrubs, and emotional family stuff.

Fortunately, I got my fix on the weekend. I fired up the Big Green Egg on Sunday and cooked half a dozen chicken breasts – some wrapped in bacon – as well as several pounds of chicken wings.

Jim stopped by and followed the smell into the backyard to find me hanging out, catching some rays on a cool but sunny December day, beer in hand.

Sure, we missed most of the first half of the early games, but the weather was fine for barbecuing. I didn’t sweat. There were no flies or wasps.

And people asked me earlier this year if I’d be using the Egg over the winter. Yes, the snow has only hit once, and just briefly, but I plan to be out there pretty much every weekend, and a few weeknights, cooking for family and friends.

I even sent a whack of chicken thighs off with the ladies for a weekend trip to Waterloo to visit with one of my brothers-in-law.

Lounging in the backyard while the meat is cooking is peaceful in the summertime. But there is something pretty darned sweet about doing it in the chill of late fall too, whether it’s on a Sunday afternoon or on a dark night, with the moon and stars staring down at me.