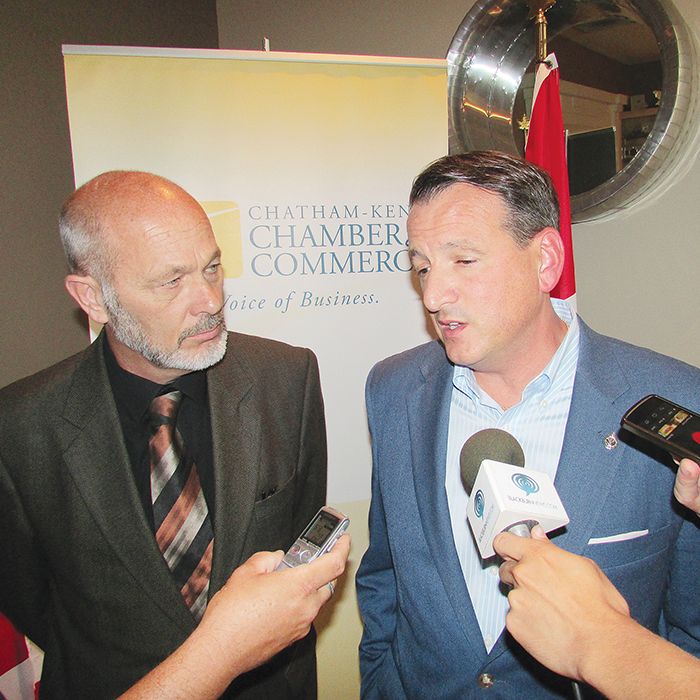 Greg Rickford, Minister of Natural Resources and Minister for the Federal Economic Development Initiative for Northern Ontario, spoke to a Chatham-Kent Chamber of Commerce lunch at Retro Suites, while hanging out with his friend and colleague, Dave Van Kesteren, MP for Chatham-Kent Essex. About 70 people attended, including a number of municipal economic development staff, the mayor and several council and mayoral candidates.

Rickford said his multiple cabinet portfolios may not appear to have much focus here in Southwestern Ontario, but added the natural gas and renewable energy realities of Chatham-Kent are a drawing point.

He said with Union Gas’ Dawn facility, “Chatham-Kent has a world-class capacity in supply and distribution for natural gas.”

He addressed questions about Ontario’s Ring of Fire, an area deep in the Canadian Shield that is said to contain billions of dollars in mineral deposits. But it’s also located in the heart of untouched boreal forest, and environmentalists are concerned about the impact of heavy exploitation of such remote and ecologically significant territory.

Rickford pointed to the government’s plan for responsible resource development. He said it helps to create growth, jobs and prosperity, while enhancing safety and security and advancing infrastructure development across Canada.

« No comparison between Blenheim and Dundurn: Nystrom Westbound 401 closed at County Road 15 »