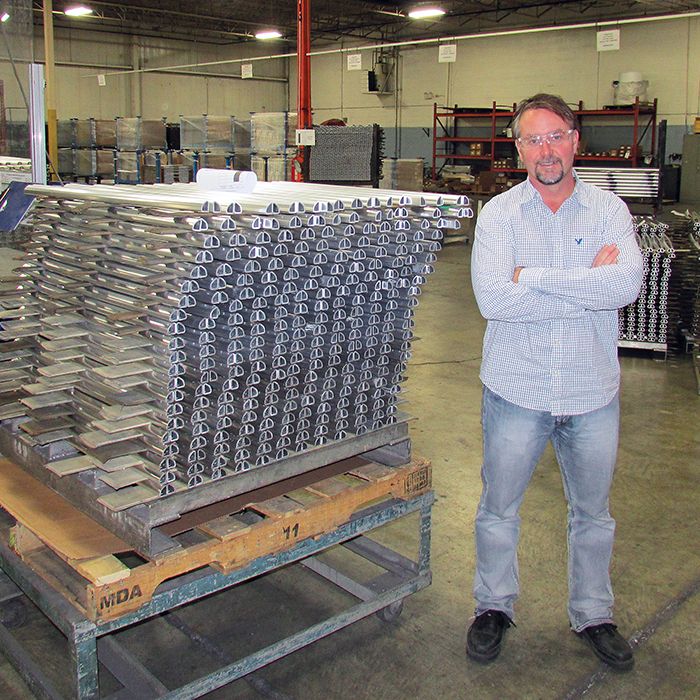 Mike Kilby doesn’t have as much time for lunch with his Dajcor team as he used to but that’s not necessarily a bad thing.

“We try to have lunches with everyone biweekly, but it’s getting more difficult because we’re so busy right now,” he said as he sat down last Friday morning for a quick interview.

Kilby doesn’t look the part of the savior of a multi-million dollar business, dressed as he is in comfortable jeans and an open shirt, but there’s no doubt that’s what he and his team have done in the last three and a half years.

Dajcor (formed by the first letter of his daughters’ Danielle, Alyssa and Justine names) arose in May of 2010 from the ashes of Daymond Aluminum, which had operated in Chatham since 1939.

Daymond went into receivership in November of 2009 but Kilby saw an opportunity.

“I met with key members of the management and union and what I heard and saw convinced me that we had a chance to turn things around.”

Since opening with a small office staff and less than two-dozen hourly paid workers, the firm has grown to more than 150 employees.

“Our business has increased by 30% each of the past three years,” he said.

Kilby said Dajcor has been successful due to its value-added philosophy and commitment to customer service. “Our niche is that we are able to do everything a customer needs under one roof. We can cut, bend, machine, brush, buff, and anodize right here. It’s much more efficient for customers because we do it all.”

“We know that by delivering top-quality products from one source, we can control our fate to a large degree,” Kilby said.

He added the firm, which is housed in a 190,000-square-foot building on Irwin Street, has a stated goal of providing diversified products. “Automotive services account for about 20% of our business, whereas with Daymond it was 70%-90%. When their automotive sector slowed, they couldn’t adapt,” he said.

Dajcor products include roof racks for the Nissan Pathfinder, handrails for Princecraft boats, luggage racks for trains, and items used in health care.

“We are a flexible company in part because we have so many talented workers,” Kilby said. “The key for us was keeping as many former employees as we could. We have about 50 people from the old company and their experience has been a great benefit.”

Kilby said Dajcor has benefitted from a favourable trade ruling when Chinese firms were found to be dumping product into North America at 30%-40% lower than allowable but that ruling is under review.

“The market is competitive enough without that type of activity,” he said. “We are gaining market share because we provide quality and a competitive price.”

Kilby said the firm is looking at investing in equipment in 2014 and could increase employment.