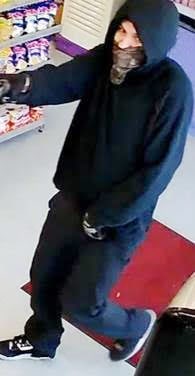 Yesterday afternoon, shortly after 4 p.m., an unknown man entered Piggy Mart on McNaughton Avenue East in Chatham, while brandishing a weapon. He demanded money, but what he got was the alarm.

The suspect is described as a white man, in his mid 20s, approximately 6’0” in height with a skinny build. He was last seen wearing a black hoodie, black pants, black and white running shoes, black gloves and a camouflage scarf covering his face.

In an effort to identify this man for public safety reasons, a video link of him entering Piggy Mart and an audio clip of his demands are now available at https://youtu.be/2ZDBxGW60hI and https://www.youtube.com/watch?v=0pqq5DLE0KA

« Crime of the Week Theft, minutes, after leaving court »