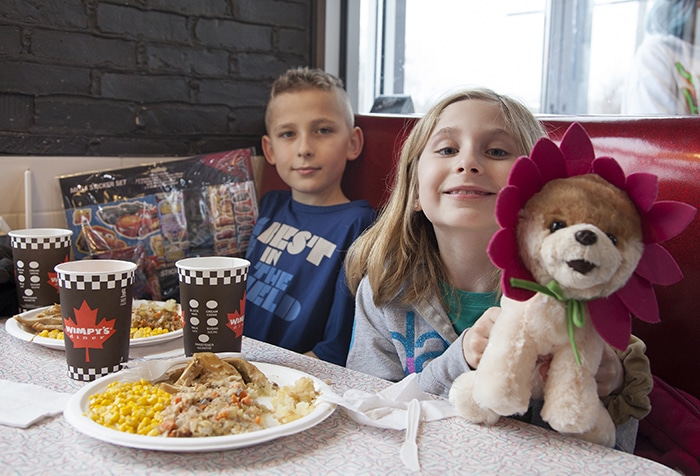 Aiden Ascombe-Lalumiere and his younger sister Charisma enjoyed a traditional meal at Wimpy’s Diner on Feb. 25 in Chatham. To become an annual tradition, the Charity Dinner welcomed those in need to a full course turkey meal. Kids also enjoyed a free gift, all courtesy of Chatham Wimpy’s owner Nazbur Rahman.

The line-up was out the door for Wimpy’s first Charity Dinner held at the diner’s Grand Avenue West location on Feb. 25.

With more than 15 employees, and about nine volunteers on hand to help serve and co-ordinate the free meal, this is a tradition that owner Nazbur Rahman plans to continue in the years to come.

Known as ‘Johnny,’ Rahman is the owner of eight other Wimpy’s Diner locations throughout Ontario and he personally sponsored the event, which expected to feed close to 500 at the Chatham location.

With plates filled with turkey, all the fixings and dessert afterwards, he has made it a point to always give back to these communities with a free traditional meal each year to those in need.

Eight years ago, Rahman started his first free dinner at his Hamilton Wimpy’s location and hasn’t looked back since.

“I thought because we are in business, we can make an effort to do something for our community, for people that cannot afford a Christmas or a good dinner,” said Rahman about why he started. 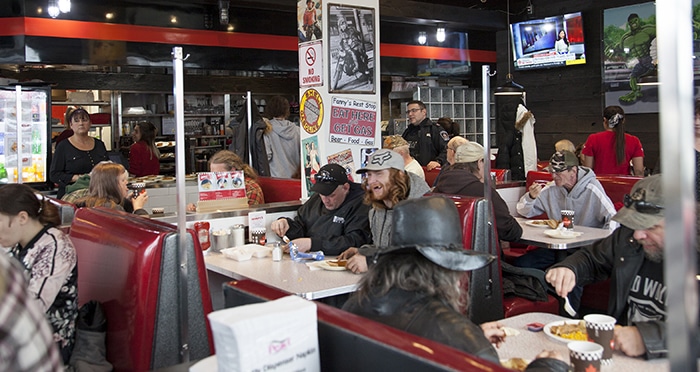 While the dinner usually occurs around the holiday season, it was decided to move it to a later date since there were a number of organizations already planning Christmas dinners.

A highlight for Rahman was any child that was at the meal also received a free gift or toy, which were largely donated by generous citizens near his Brantford and Muskoka locations, and Rahman himself.

“This is a contribution from me, from my heart and my family so everyone can enjoy a good dinner and the kids can enjoy a gift,” said Rahman.

With plenty of help from staff, volunteers, Chatham-Kent Police and the Chatham-Kent Fire Service to make sure the distribution of food was smooth, one of the most important details was that everyone who ate during the dinner enjoyed themselves.

“I’d rather make it smaller and make sure everyone leaves here happy,” he said. 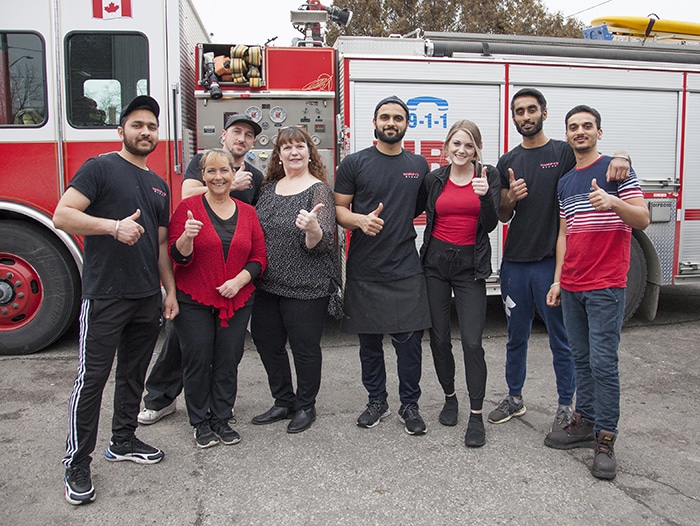 Fifteen employees of Wimpy’s Diner in Chatham were joined by volunteers, Chatham-Kent Police Service and Chatham-Kent Fire Service to help serve those at the Charity Dinner on Feb. 25.

« Irish Rovers to play in Chatham on St. Paddy’s Day A tale of two seasons »