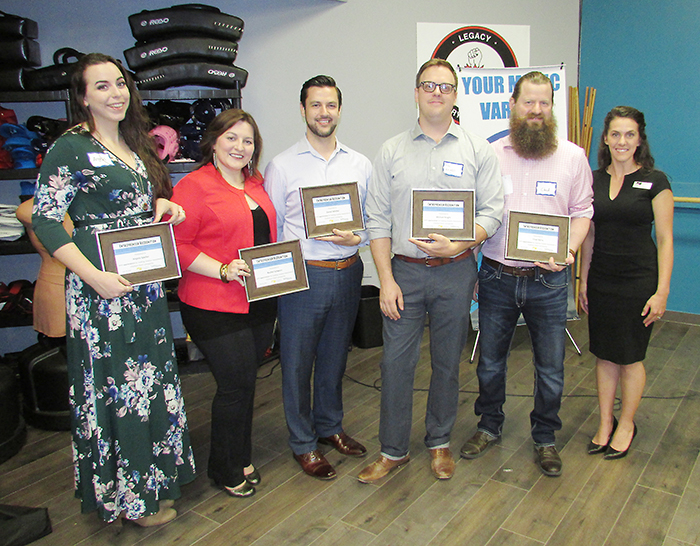 From left, Angela Speller of Angela Speller Photography, Rachel Schwarz and Daniel Whittal of Brio Academy and Whittal and Associates, Michael Knight of Level Custom Design and Chad Berry of Chad Berry Photography recently were honoured for their entrepreneurial spirit in Chatham-Kent. With them and presenting the awards is Cecily Coppola, chair of the Chatham-Kent Chamber of Commerce.

At the final Business After Hours event of the season, the Chatham-Kent Chamber of Commerce, in conjunction with the C-K Workforce Planning Board, doled out entrepreneurial hardware to five people.

Berry, who runs a self-titled photography business, said he only became serious about his photography skills about seven or eight years ago, and it wasn’t until just three years ago, he decided to pursue it full time.

“Three years ago, I took more control of my life. Rather than work for someone else, I work for me,” he said.

While he shoots a great deal of weddings these days in Southwestern Ontario, it was landscape photography that initially gave him the shutter addiction.

“I photographed my first moose and I was hooked,” he said.

The onetime corporate retail expert needed a change of pace.

“I did store openings coast to coast. I was looking to get off the road,” he said, and wound up in the woodworking business.

A little over a year ago, he opened his business.

“I couldn’t be more happy with what I do,” she said. “I love that I can do this all in my hometown.”

Whittal said his law firm has gone from operating out of his basement to an office space on Richmond Street, in the same building as Brio Academy, indicating there is large opportunity for growth here.

He also likes that his day job is so close to his night job of teaching karate at Brio.

“After being downstairs in my dress clothes, I come up and put on my karate pyjamas,” he said.

His wife, Schwarz, said Brio fits in well in Chatham-Kent.

“We moved back to Chatham and saw there is a lot of great stuff in Chatham,” she said.

“It’s a learning environment for kids where they can grow in a really safe way,” she said.

“I love Chatham. I’m passionate about our business community.”