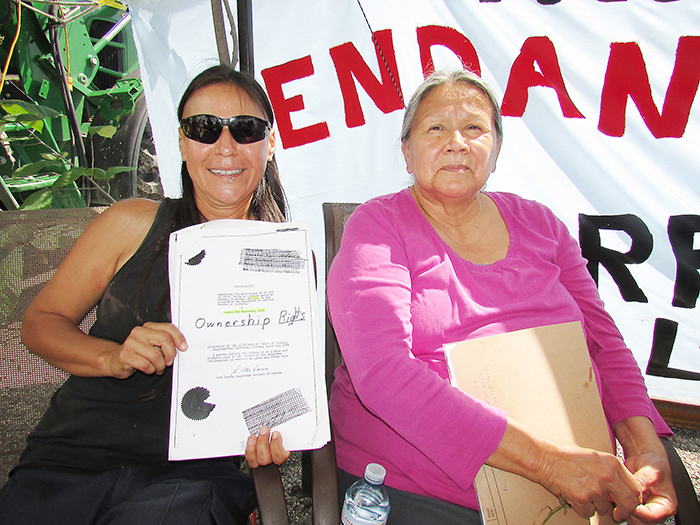 Head Crane Clan Mother Cindy Soney, left, holds the documents deeding North American land to First Nations people. With her is Corrine Tooshkenig, Clan Water Grandmother who is joining the protest and said this is an international and human rights issue.

Cindy Soney and Corrine Tooshkenig happened to drive by the Bush Line blockade last night, after hearing about the fight by WWF to stop turbine construction until the water well problems in north Chatham-Kent are investigated. Soney was present Wednesday morning when Chatham-Kent police came to the Bush Line site with Pattern Energy officials to remove the protesters.

Soney, who holds the title of Supreme Authority of Great Turtle Island (North America) and Head Crane Clan Mother, and Tooshkenig, a Clan Water Grandmother, held a document which is a deed of land proclamation from 1850 in the Province of Canada which gives ownership of the land to First Nations.

“The document is for the ownership of all of North America. As the original inhabitors, we never sold any land and that goes back to our traditional clan system. I am top of the clan system as Head Crane Clan Mother,” Soney explained.

WWF spokesperson Kevin Jakubec went to speak to the police and told them they would have to talk to the property owner, Soney, who showed them a certified copy of the document deeding them the land. Jakubec said the police backed off and the Pattern Energy officials said they would be consulting with their lawyer.

Tooshkenig said the papers go back to work done by the clan to prove land ownership during the Kettle Point dispute near Ipperwash where First Nations member Dudley George was shot and killed by police while participating in a blockade. Soney added that all government law enforcement agencies in the U.S. and Canada have been given a copy of the document.

Soney said she heard about the water well issues in north Chatham-Kent and drove to the area where she heard protests were being held.

“I have been watching wind turbines for the last 15 to 20 years and see what they are doing so I came out,” Soney said. “Just by accident I drove by and saw the sign and saw the protest was still going on and I stopped in and said I can help out. So, this is my first formal (time) taking the paperwork and standing up and saying, ‘Hey this is wrong. Duty to consult is with me and you’re ruining these people’s water. Food, water and shelter are the three basic necessities that everyone in North America should be entitled to without any question.’”

Soney said she and Tooshkenig will be staying with protesters to help their fight to halt turbine construction.

“We’re trying to fight for our future generations and our children. I don’t have any children but I am up for the fight of the life of Mother Earth. We have destroyed her way too much in the last hundred years. It affects us all,” Soney noted.

Jakubec, who was visibly moved by Soney’s help and comments, said he was surprised and thankful for the help from the Clan Mother and Grandmother. He was given the tittle of Grandfather from Tooshkenig, which she said is the highest honour given to people like Jakubec for “protecting future generations from the now.”

Marc St. Pierre, a resident of Bay Line in Dover, said the help from Soney gave him new hope they can stop the destruction of well water.

“I’ve never seen anything like it in my life, to have so much clout against police and elected officials,” St. Pierre said at the Bush Line protest blockade. “Their cause is the same as our cause and I feel like we have a much bigger backer behind us and maybe we can even stop construction until a better way to build turbines that don’t hurt our aquifer.”

With an eighth well reporting dirty water now in the North Kent Wind One project area, and pile driving continuing, St. Pierre said the situation was getting depressing. He has been dealing with sediment in his well for the past four years and uses four filters on his well just so he can bathe in the water. He buys drinking water because he said the MOECC refuses to test his water for heavy metals and tell him if his water is safe to drink.

“This has given us hope that more and more people will see the destruction. We have new hope and new confidence,” he added.

Soney and Tooshkenig remained at the site Wednesday and performed a sacred ceremony to put up Thunderbird prayer poles at the Bush Line protest site. Tooshkenig said the ceremony asks for the creator’s help, noting “it’s like putting up a cross.”