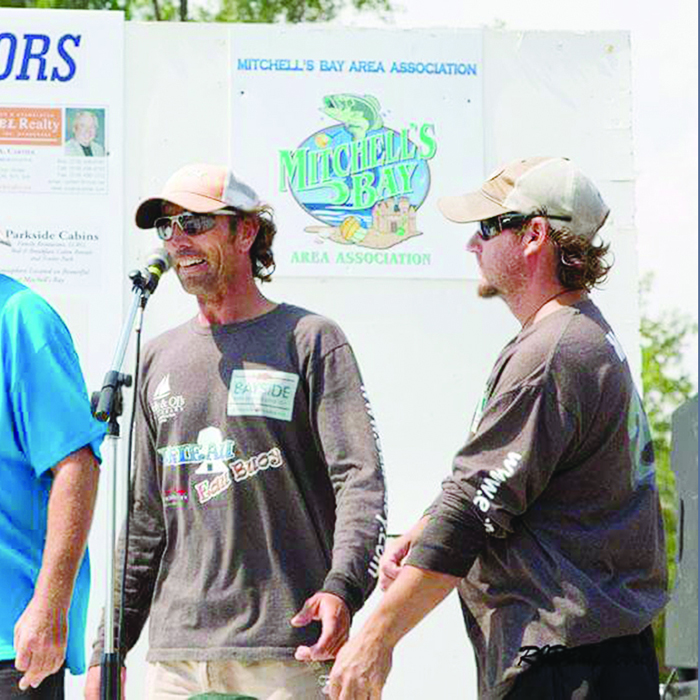 It keeps getting bigger and better, and that’s just the way the organizers of the fourth annual Mitchell’s Bay Open Bass Tournament wanted it.

This year’s event takes place July 7 and 8, and five dozen boats are expected.

Coming off a solid year in 2016 where 41 boats took part, organizing committee member Tom Beaton said there are already 50 registered for this year’s event. He expects 60 boats to take part. Not all are hardcore anglers.

The event begins the Thursday night, July 6, with the anglers’ dinner. Beaton said members of the farming community donate to help kick off the tourney with the meal, which is for the anglers, volunteers and sponsors. Edward Jones and Excel Realty sponsor this element of the weekend.

The boats take to the water the Friday and Saturday.

Beaton said organizers have put a great deal of effort in the planning and running of the tournament, as committee spent two years planning for it before the inaugural Open took place in 2014.

He said new tournaments can be met with caution by anglers.

“It seems everyone is hesitant about new tournaments. They prefer to fish ones with history and a good reputation,” he said.

For Mitchell’s Bay, the Open quickly garnered a good reputation and now is working on having some history.

“We’re not for profit; 100 per cent of the entry fee goes back to the anglers, plus early bird prizes,” he said, adding the payout is closer to 120% of the entry money.

That’s possible thanks to generous support by sponsors.

Money made from the tournament through the sponsors is purposed towards various Mitchell’s Bay projects, Beaton said.

“All the monetary support goes directly into tourism enhancements, habitat and wetland restoration,” he said.

A highlight to the Open weekend is the annual children’s fishing event, where 20 kids head out fishing on the Saturday morning, sporting a new rod, reel and tackle – items they will take home with them.

Beaton said this year the tournament has teamed up with the French school board, and next year will work with the Canadian Tire Jump Start program, which helps 1.5 million kids in Canada with funding so they can stay in various sports.

Kids’ tourney sponsors are ENGIE Wind and Al’s Lawn Care. The two companies have sponsored the event every year to date.

In terms of prizes, this is not a winner-take-all tournament. There’s also a $1,000 price for the biggest fish, as well as numerous other prizes.

For anglers running with Triton boats, there are a host of additional payout opportunities. Finishing first and using a Triton boat could land a team as much as $7,000 in additional prize money, depending on the model year and engine size.

Beaton said local anglers have traditionally fared well in the tournament, with two local teams winning past events, but added this year will feature the largest out-of-town participation to date.

“We’re becoming the premiere bass tournament in Ontario,” he said. “They (anglers) are really impressed with how we run it, but also with the support behind the tournament. And we couldn’t do it without the 50 volunteers who help us.”

Beaton added that the tournament would also not be a success without the sponsorship it has received over the years. This time around, Canadian Tire in Chatham and Wallaceburg is the top corporate sponsor. Maple City Marine, CARSTAR London and Excel Realty are the other diamond-level sponsors.

There are more than 50 other sponsors that help make the Open possible.

Beaton said the silent auction continues to grow. Included in the variety of items up for grabs this year are a Weatherby shotgun, a variety of animal carvings, and a bicycle.

Items are displayed from the time of the anglers’ dinner until weigh-in on Saturday afternoon.

“We encourage everybody to come down for the weigh-in and check out the silent auction. We had almost 300 people last year,” Beaton said.

The Mitchell’s Bay Open is a live release tournament. There are penalties to teams for dead fish.

There can also be penalties to the tournament if the fish mortality rate is too high, Beaton said, as the pontoon release boat is licensed under the Ministry of Natural Resources and its operators report the mortality rate. If it exceeds five per cent, the MNR will investigate.

“We try to make sure the fish get back in the lake. Last year, we had only one or two dead fish,” Beaton said. “Our goal is zero mortality rate. We’ve been able to accomplish it.”