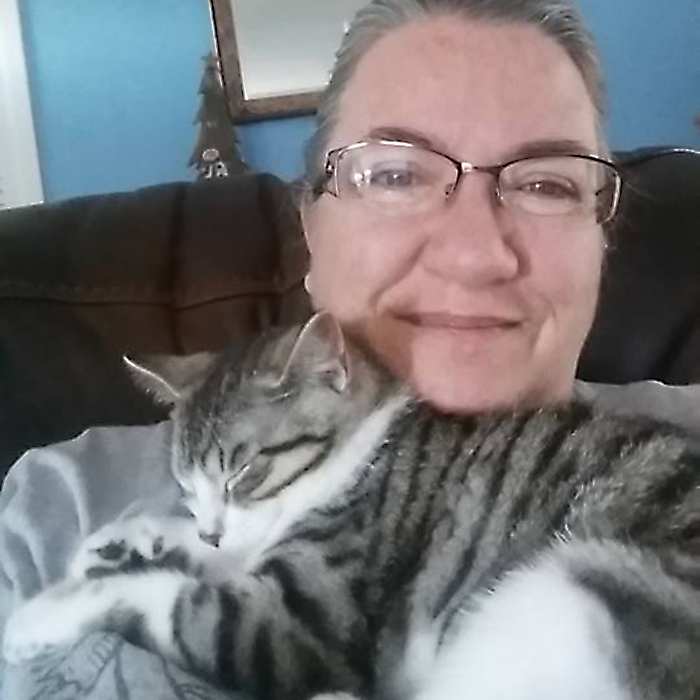 We received another visit from the crazy kitten recently. Yes, Sasha, my sister-in-law’s kitten seems to have won the hearts of my wife and daughter. Well, maybe me too.

The first time we cat sat a few months ago, the ladies were hooked on the cute little fur ball. I had to admit, the kitten was really cute, loved to play and was very affectionate.

And had smelly farts. Very smelly, especially for a little kitten.

So, a couple of months pass and that not-as-little bundle of joy returned last week for a few days. Still very cute and very playful. But while the little kitty tired out easily and slept in your lap after a bit of play time, the new version seems more peppy … and crazy … and just as inclined to expel noxious fumes.

Everything is a potential toy for this maniac, especially me. My hands seem to be of particular interest for this feline. If I’m using my cell phone to look something up online, or playing a game of solitaire on my phone, it appears to be open season on attacking my fingers.

The kitten would come out of nowhere, leap up into my lap and latch onto a finger. What nearly caused my wife to fall out of her chair in a fit of laughter was that the cat paused in mid-chomp, her mouth wrapped around my knuckle, looked over at Mary Beth almost in greeting, and then went back to her chew fest.

Our first time with the kitten saw peaceful nights. We’d close our daughter Brenna’s door and the kitty would sleep away the night on the bed.

This time around, she spent the first night in Brenna’s room, but then opted to see what else was up. I fell asleep in the recliner on night #2, only to be awakened at the approach of two females, my wife and this crazy cat. The wrong one jumped into my lap.

Mary informed me it was my turn with the cat, as it had hopped up onto the bed, right on her chest, and woke her up, before proceeding to clean itself.

I wandered off to bed as well, hoping to at worst be used as a cat pillow. Nope.

The kitty wanted to play. I could feel her eyes on me, but I did my best to remain still, while ensuring my fingers were tucked away under the blanket in chew-free safety.

“Don’t move your feet. She likes toes,” Mary informed me. Great. I think I have a mild form of restless leg syndrome where my legs move a fair bit at night as I sleep.

As I started to doze off, thinking the cat would settle as well, BOING! She pounced on my right foot, going for the toes through the comforter. I stopped moving.

Next thing we know, the cat is walking across Mary’s night table, and knocked something off it.

Out she went and Mary closed the door.

As I sat down to do my Thursday morning chat with Greg Hetherington from CKXS, I half expected the kitten to rappel down from the ceiling and land on my head. Surprisingly, as Greg and I started talking, there was no sign of the kitty. But as we talked about the Indoor Chatham Auto Show, the furry maniac came out of nowhere and launched herself at me.

Now, I chat with Greg each Thursday with my cellphone, utilizing the headphones and mic that came with the phone. That dangling white wire must have served as a golden invitation.

Jane took the kitten home Sunday. I breathed a sigh of relief, and Mary Beth pouted, asking who would now rub their furry face up against her cheek. I offered, but received an epic eye roll in response.

Both of us swore we could hear periodic meows in the house after the cat left. Separation anxiety, or distant haunting?

Putting pork on their forks

Chatham Voice graphic designer extraordinaire Michelle Owchar held a surprise party for her mother’s 60th birthday celebrations on the weekend, and I offered to cook a pork shoulder on the Big Green Egg so everyone could have pulled pork.

Of course, I offered during our unseasonably mild conditions, and Friday night delivered unseasonably chilly weather.

All that meant was more charcoal used for the cook, and resulted in a slight extension to the cook time to about 18 hours from the usual 16.

Getting the Egg at the right temperature initially is the challenge. If you get the charcoal burning too hot as you heat the Egg, it wants to keep going at that temperature. Force it to cool down too quickly and you risk snuffing it out.

But after one peak at about 290 F, I cranked it back so the Egg rocked along at 240 F, and fell asleep in the recliner. Either the visiting cat or the usual middle-of-the-night need to urinate – or both – woke me up about 2:45 a.m. I checked the Egg and stirred the coals, and sat down outside for a bit to see how the Egg reacted. Cold weather aside, it’s always really peaceful sitting outdoors in the middle of the night, especially with a clear sky above.

The Egg was running too cool, so I opened the vents slightly and went inside. But I had a nagging feeling I opened them up a bit too much, and turned on the TV. I woke up at the end of the show and heard the alarm beeping on the DigiQ. Back outdoors to adjust, and things ran smoothly from there.

Even after a morning stir about 9 a.m., the Egg held temperature nicely.

Despite the pork taking longer than expected, it was well received at the party. Of course it helps that Mary makes a killer tangy sauce from scratch to go with the pulled pork.