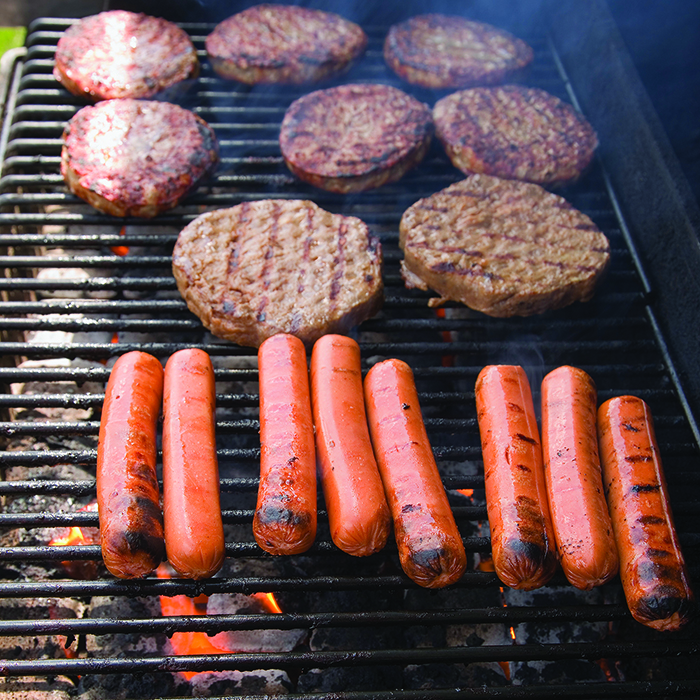 I’ve come across a number of folks recently asking me about what I’ve been barbequing. With all the great content in our paper the past few weeks, I’ve stepped aside in column writing to ensure we keep our readers informed on a number of key issues, and provide space for reader feedback with additional letters to the editor.

I have not cooked anything exotic in recent weeks. In fact, my Big Green Egg hasn’t had a serious workout in some time. That will hopefully change soon.

But on the weekend, I helped serve up a whack of hotdogs and a heaping helping of burgers at the annual Relay for Life Stuff Sale for the Canadian Cancer Society.

I’m not chairing this year’s Relay, which takes place June 11 at CKSS’s athletic field, but when organizers were looking for some grill support, I jumped at the chance.

Louie Jeromel is in charge of food for the Relay event – has been for years – and he also manned the grill for the sale. He’s a man with a smart plan, as always.

The sale took place Saturday morning in the parking lot in front of the old Target store at the corner of Keil Drive and Grand Avenue West. Great location. Participating Relay teams were invited to gather and set up tables for a large yard sale, and they drew crowds.

So too did the Drive 4 UR Community event run by the good folks at Victory Ford Lincoln. There were a half dozen vehicles on hand for test drives, and Ford donated to the Cancer Society a set sum of money for each test drive.

The event was so popular that when I left at the end of the Stuff Sale after 1 p.m., the Victory folks were still processing drivers.

And then there was Louie, working his magic on the grill. His efforts started before I got there with the meat. Even if you don’t like onions, the smell of them cooking up on the grill will get your stomach growling. As soon as Louie had the barbecue set up, he put on two large pans of onions to simmer.

Meanwhile, I popped into Schinkels’ Gourmet Meats just after 8 a.m. and picked up the load of ballpark franks and hamburgers owner John Schinkel had pledged for the day. How good are these? Let’s just say my daughter believes these are the second best hotdogs on the planet, second only to the ones served up at Tigers games at Comerica Park. These are my burger of choice on our grill at home too.

By the time I arrived about 8:15 a.m., Louie’s magic was having its impact. He’d already had hotdog inquiries!

By 8:30 a.m., the first hotdogs were ready and we started to sell. And did we sell! It was the perfect situation – some sunshine, some wind to send the barbecue aromas across the parking lot, and solid foot traffic. By 10:30 a.m. we had almost sold all 75 hotdogs we had, and we’d cracked the second box of burgers.

I had to head back to Schinkels’ to purchase more dogs, except John didn’t want to see any cash, as we were holding a fundraiser for a good cause.

On went more hotdogs, and they continued to sell well, and the burgers were picking up the pace too. The onions were going out on pretty much every other hotdog or hamburger.

They were in such high demand that we ran out of onions. And then we ran out of hotdog buns when we still had about a dozen dogs remaining. But we had hamburgers buns, so we sold “hamdogs” until we were out of franks.

So I approached Jim Blake, my business partner here and this year’s Relay chairman, and asked him to slide out to fetch more buns. I might have said “hotdog” instead of “hamburger,” as he returned with a couple of dozen hot dog buns. As he went back to get the proper buns, we sold more “hamdogs,” only this time they were hamburgers cut in half and placed in hotdog buns, the reverse of what we’d sold earlier.

Folks were incredibly understanding, laughing at the name and suggesting we should trademark it.

By just after noon, we sold out of the last of the burgers. After a morning of go, go, go, we just looked at each other. We had raised a fair bit of BBQ coin for the cause, and cleanup was a simple process.

My hip went through the four-plus hours on my feet just fine. But after some standing around as we waited to clean up, I was ready for some down time.

That was the only barbecuing I did on the weekend. I have to get back into the habit, as the pond is up and running in the backyard, and hanging out there is quite peaceful.

Then again, Mother Nature has to co-operate.