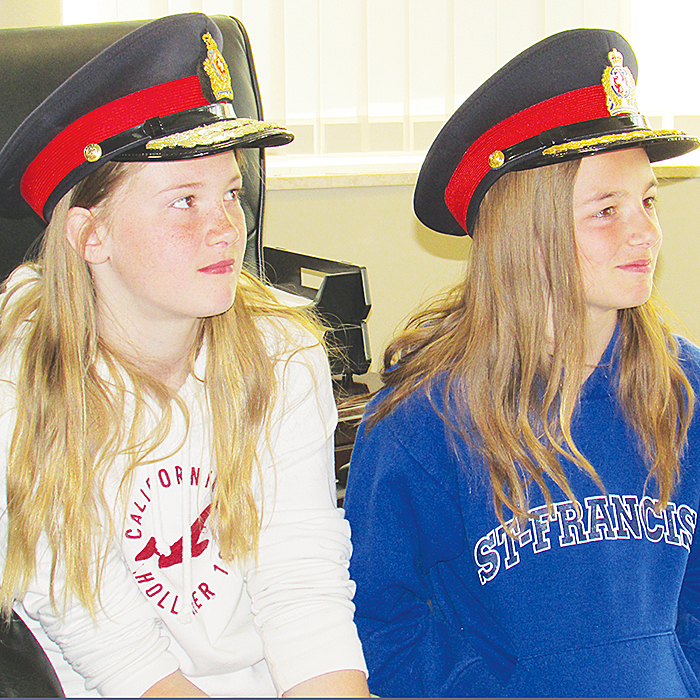 Grade 5 students across the municipality were asked to write an essay on why they would make a good chief, in conjunction with the Values, Peers and Influences program (VIP) program offered to students by the police service each year. Winners Selena Wall, left, from Dresden Area Central School and Haley Mailloux, right, from Ecole St. Francis in Tilbury wrote the winning essays and got to spend the day at police headquarters, checking out the inner workings of a police station.

This is one of two winning entries in the Chatham-Kent Police Service essay contest “If I was police chief for a day.”

If I was chief police of the Chatham-Kent police service for a day I would patrol the streets so there is no danger. I would also make sure there’s no robberies.

To prevent robberies I would put an alarm on all stores so when a robber comes in everybody will hear it. And I would also put signs up for animals so they could cross the road without getting hit by any vehicles.

I would also try to stop bullying by going to all schools to talk about it and make sure they got the message. I would like to go undercover on the highways cause that’s were lots of cars are and they will also have more chances of speeding.

A good idea as a chief police would go near the school roads to make sure all kids on the buses or were there’s lots of danger I would go there and pretend I’m one of them but at the same time I would be telling them to stop and put video cameras all over to watch them. I would love to put somebody in jail as long as they deserve it.

I would never shoot anybody on the job because I think everybody deserves to live…But if someone tried to shoot me or any other police chief then I think we should have the right to shoot them.

As being chief police I would try to stop people selling drugs and smoking and having tobacco…. I would try to stop that by closing all tobacco and all the stores/factory’s that sell beer, alcohol, tobacco and smokes. Closing those stores and factory’s will make sure nobody buys those things and nobody will get sick and drunk and will survive. In conclusion I would stop everything bad so we live in a clean place and people will be happy and not scared.