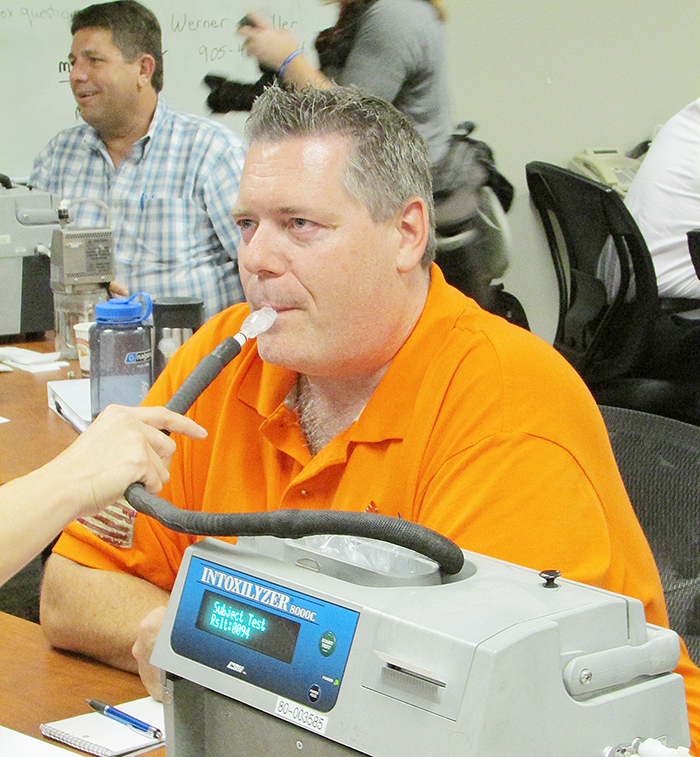 When the police ask for your assistance, you jump at the opportunity to help. When they tell you they will feed you free alcohol for an hour, you leap over chairs and push people out of the way!

OK, so maybe you crack a big smile and reply via e-mail as fast as your fingers can type, if you’re a middle-aged, overweight journalist.

Fifteen police officers needed my help Oct. 2. Who was I to say no?

They were in an intensive breath tech course on the Intoxilyzer 8000c, a blood-alcohol reader that police use at their stations to accurately see how much booze is in a driver’s system.

These aren’t the little hand-held roadside Breathalyzers that are in most every police cruiser, but are big, clunky and very accurate machines. While every officer can use the hand-held, on-the-spot breath tests, only a handful of officers on a police service are qualified on the Intoxilyzers.

In Chatham-Kent, there were just 10 last week, but eight more were going through the course.

The training is a hot commodity. Police services across the province petition the Centre for Forensic Sciences and the OPP – the organizations that conduct the roving clinics – to allow them to host such events.

Chatham-Kent landed one this year, four years after hosting its last one.

“This is a really good opportunity for us,” Mike Thompson of the Chatham-Kent Police Service said. “Instead of sending officers out of town, they can show up here for their training.”

Police services from as far away as West Nipissing, northwest of North Bay, sent officers to Chatham to take part.

I signed up to participate as a test subject not only because of the free alcohol and to help the police. There was some personal curiosity as well. I have been known to have an alcoholic beverage or two at local watering holes. My vehicles have spent more than few nights in restaurant parking lots. Drinking and driving is folly.

But I was curious to see what my blood-alcohol content would be and how intoxicated I would appear to the police officers.

Fellow reporter Ellwood Shreve and I consumed eight beers each in the one-hour time period. Yes, rather filling, but all in the name of science, right?

I felt drunk; I was drunk. Not blitzed, but intoxicated.

Radio guys Dave Palmer and Jake Kislinsky were about a beer behind Ellwood and I, so all four of us were excellent test subjects.

We rotated from station to station, blowing into the Intoxilyzers and getting our readouts. All the officers were great to deal with, some almost turned it into a competition, loudly encouraging the test subjects to blow for as long as possible. Those West Nipissing guys almost made me spit out my mouthpiece a couple of times as I tried to hold back a guffaw while blowing merrily away.

We were all told we’d likely blow below the legal limit, despite the large amount of booze consumed in a short time period. It can take a while to enter your blood stream.

Not me. I consistently blew more than 100 milligrams of alcohol in 100 millilitres of blood, and never below 90. The legal limit is 80, but you get a three-day suspension if you top 50.

Had I been behind the wheel, I’d have been charged.

I asked the cops if they’d pulled me over, would they have considered me impaired. All of them said I had somewhat glassy eyes, but spoke without slurring, showing little outward signs of impairment. Still, with the eyes and a smell of alcohol, they all said they’d have tested me.

I knew I was in no shape to drive before any breath tests. I was surprised I came off as hardly appearing impaired.

It makes you wonder how many people think they can hide the fact they’ve been drinking and opt to get behind the wheel. That’s a dangerous game, not just with your driver’s licence, but potentially with someone’s life.

While I showed little impairment, but blew well beyond the legal limit, the other side of the coin is where people come off as impaired, but blow a green at a roadside test. Officers still have the discretion to make an arrest for impaired driving. It’s a separate charge for having more than 80mg/100ml.

If police pull you over, they’re going to check for the smell of alcohol, your demeanour and if you are slurred in how you speak, or being overly slow and deliberate. If you think you can fool them, you’re likely fooling yourself. 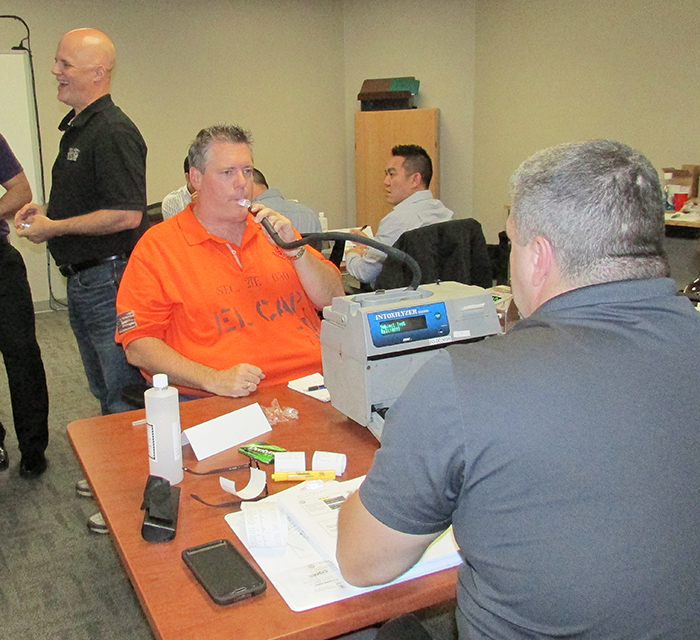