Ball at the Forks offers glimpse and taste of 1813

Sep 25 • Feature Story, Local News • No Comments on Ball at the Forks offers glimpse and taste of 1813 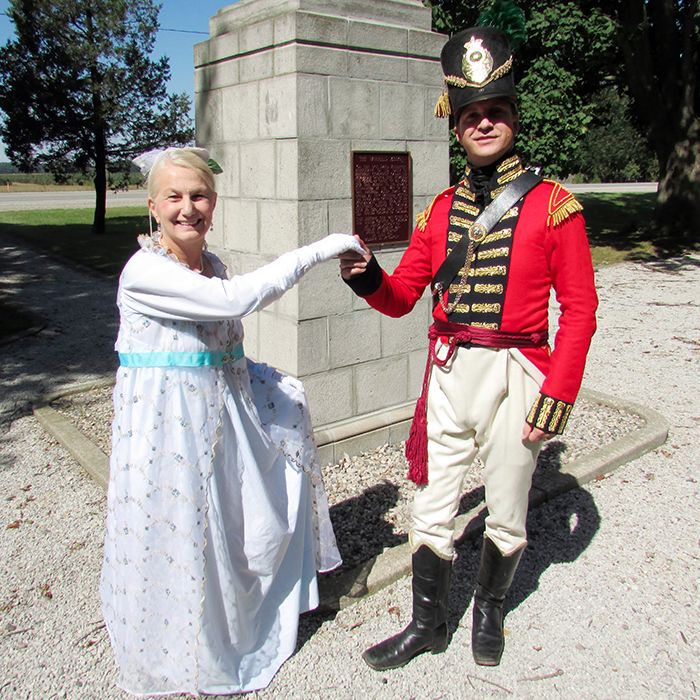 Linda Corrente, a member of the Ball at the Forks committee, and Battle of the Thames chairman Mark Dickerson will be in full period costumes for the ball at the Armoury Oct. 5, which takes place after the battle re-enactment earlier in the day on Longwoods Road. Tickets to the ball are still available.

As we turn the clock back 200 years to commemorate the Battle of the Thames on Oct. 5, some folks will also strap on their dancing shoes for the Ball at the Forks.

The dinner and dance takes place at the Chatham Armoury on the evening of Oct. 5, after the smoke clears from musket fire at the re-enactment of the battle.

Linda Henderson, chair of the ball committee, said it should be an entertaining evening.

“This event is definitely worth attending. It should be great fun. There’s wonderful food and a chance for people to experience a regency dance,” she said.

The event is billed as an 1813 regency gala. Dance mistress Cathy Stephens will be on hand to help attendees learn the moves of the dancing from the early 1800s.

“She will walk everyone through the dance and then the musicians will accompany her,” Henderson said.

The music isn’t the only element of the ball that hails from days gone by. When people arrive as the doors open at 5 p.m., they’ll enter a ballroom from 200 years ago, as the Armoury will be decorated accordingly.

Dinner, catered by Four-Diamond Catering, will consist of period food. Ditto for the late-night buffet.

There will also be an aboriginal drum demonstration.

As for the attendees, Henderson asks that as many people as possible come in period attire. It might not be too difficult for the re-enactors who will attend, but it could be for others. If that’s the case, just come in modern formalwear, she said.

“Just anything you’d wear to a wedding,” Henderson explained.

“Regency style of dancing is generally with the men on one side of the room, the women on another. You walk in and walk out,” Henderson said, “It’s a very different king of dancing than what we do today. Today, we kind of shake. This is very slow and very choreographed.”

Tickets for the entire evening are $85 per person. For anyone wishing to attend the dance only, the price is $30.

Henderson said there are still plenty of tickets available, but they can only be purchased online through www.cktickets.com.